Do you want to learn Spanish?

Are you interested in learning a new language? In the following we would like to give you during your internships Spain or in Costa Rica a Spanish crash course. It is good to learn some Spanish for your hotel placements. This little blog entry is supposed to give you an insight into the basics of this beautiful language and hopefully will help you to learn Spanish.

If you are planing to realise an internship Spain you have to learn Spanish. Of course you cannot learn a language over night but you should at least learn some phrases. It makes a huge difference if you approach people in their native language even if you just say “Hola” much better than immediately approach them in English. In general Spaniards love it if they see (or hear ?) that you put some effort in learning their language.

Also if you want to do your internships in Spain you will realise that not a lot of Spanish people speak good English. To learn Spanish can become handy in many countries not just if you are doing an internship in Spain. Spanish is the second most spoken native language in the world (over 400 million native speakers!!!). Spanish is the majority language in 21 sovereign states and few dependent territories with lots of different dialects and some different words. But if you learn Spanish you will be understood and you will understand the different dialects as well (sometimes it will be harder but never impossible).

If you learn Spanish the right pronounciation is key or you will have trouble being understood proberly. Luckily Spanish is pretty easy when it comes to pronounciation and reading. You pronounce every word the way you read it. There are only a few exceptions but once you have learned those rules you can already read Spanish! After each letter we will give you example words and recommend you to listen to those words online (for example on Youtube) to get the right understanding of the sounds. In the following we will explain the letters you have to learn the others are basically prounonced as they are read.

C – The “C” is a bit tricky. First of all you have two different pronounciations depending which vocals will follow the “C”. Is the “C” followed by an “A”, “O” or “U” it is pronounced like a “K”. If the “C” is followed by an “E” or “I” it is pronounced either like an “S” (like in son) or (in some parts of Spain) like a “TH” (like in think). It depends where you want to use your Spanish you might want to adapt but you will be understood no matter if you pronounce it like “S” or “TH”.

G – The “G” has the same like the “C” it depends on the vocals that follow on how you will have to pronounce it. If it is followed by an “E” or “I” it is pronounced like a guttural “CH” (this sound does not exist in English the only exception would be the proper pronounciation of “Loch Ness”, for German speakers it is a lot easier it is the same sound as in “Buch”). If it´s followed by an “A”, “O” or “U” it is pronounced like a “G” (like in get) à also note the “gue” and “gui” in the explanation of the “U” below

H – The “H” in Spanish is always silent.

J – The “J” might sound harsh to some ears. It is pronounced like a “CHR” again this sound does not exist in English the only exception would be the proper pronounciation of “Loch Ness”, for German speakers it is a lot easier it is the same sound as in “Buch”.

LL – The double L is pronounced like the “Y” in yes

R – The “R” at the beginning of a word is rolled in Spanish and might be tricky for many learners. Just practice this sound and try to roll it as good as you can. Is this letter in the middle of a word you have to quickly touch the upper palate with the tip of your tongue. It is hard to explain you are better of listening to an example.

W – The “W” doesn´t really exists in Spanish only for loanwords so the pronounciation will differ.

á, é, í, ó, ú – If you see the accent over a vocal it means you have to stress this vocal in your pronounciation 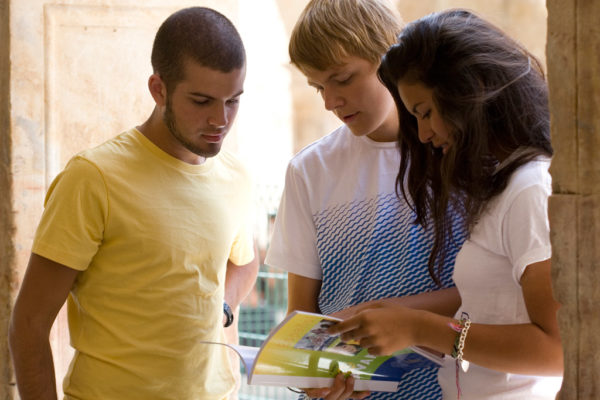 You gotta learn to crawl before you can walk. After you have learned how to actually read the words we want to introduce you to some phrases to help you to learn Spanish. Especially when you undertake your internships Spain or in Costa Rica you have to learn some phrases to make your start easier. (In some countries you will see the double exclamation or qestion mark ¡Hola! / ¿Cómo estás? In the following we will write the phrases with the single exclamation or question mark but again it is up to you which variant you choose to learn and use ?)

How / What are you doing?

Nothing compares to learn a language in a country where it is spoken or in a language course with a teacher. But there are many ways you can learn Spanish online or with apps.

One app that is good to get your Spanish going is “Duolingo” you won´t become fluent with this one but you will learn many gramatical rules, words and phrases. You will have many listening, talking, writting and reading excercises. Another good thing about this app is that it´s for free (if you don´t want to learn Spanish you can still use this app since it offers many more languages).

You can also listen to Spanish radio the app “Radio España FM” offers many radio stations and you can listen to where you want. It´s a nice musical way to learn it. If you listen to the news reporters you might understand a little bit but if you listen to songs you like and maybe translate the lyrics you will easily learn a lot.

You also have the option of Youtube. I personally like the Spanish course “Spanish with Paul”. Although he is not native his videos are amazing. He explains how the language works and does step by step excercises so you easily learn to build complex sentences.

If you like to learn Spanish with a TV show you can find “Extra” on Youtube. “Extra” is a Spanish comedy TV show for foreigners to learn the language. The episodes are in Spanish but easy to understand ?. It is definetely a fun way to learn and you will get used to the sound of Spanish natives (from Spain).

I also like to watch Spanish documentaries on Youtube about a subject I´m familiar with and because they are easy to understand.

Youtube also offers various audio books in Spanish. Those are the free options online of course there are more possibilities to learn Spanish online but you´ll have to pay.

Starting with reading kids books or newspapers is also a way of getting used to Spanish and to learn the structure of the language and words.

You can also go around your room or apartment and attach sticky notes to various things. So everytime you will look into the mirror you will see “el espejo” (the mirror) and so on. It is important to learn a language constantly even if it´s just a bit of vocabulary a day. 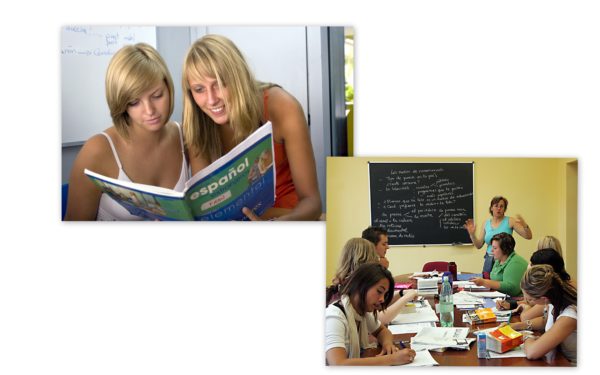 If you are very serious and you want to learn Spanish we can also organise a Spanish language course in Spain mainland or on the Canary Islands for you. Afterwards you could undertake an internship in Spain and your success will be guaranteed. Because after all the best way to learn a language is to talk to Spanish speakers as much as you can and to live in a Spanish speaking country. ?